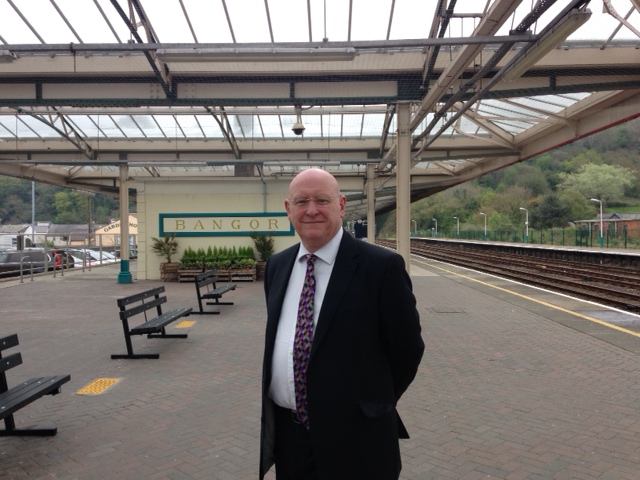 Renewed calls have been made by local politicians and academic leaders for the Westminster Government to set a firm date for the electrification of the North Wales Main Line between Holyhead and Crewe.

Plaid Cymru Member of Parliament for Arfon, Hywel Williams said it was high time the government stopped dithering and pushed ahead with electrifying the 135km route, claiming commuters in north Wales were bearing the brunt of indecision and false promises.

His calls have been echoed by Bangor University’s Vice-Chancellor, Professor John G. Hughes who’s called for a ‘rapid and significant’ improvement to train services along the north Wales coast.

“I have repeatedly pressed for the earliest possible electrification of the North Wales Main Line. Successive governments have so far dodged the issue, at the expense of commuters in north Wales who are bearing the brunt of political dithering.”

“In practical terms, electrifying the line between Crewe and Holyhead makes perfect sense. At present, trains travelling between London and Crewe travel twice as fast as those between Crew and Holyhead.”

“It’s not acceptable that once commuters cross the border into Wales they’re expected to make do with a significantly reduced service comparable to a third class rail experience.”

“Many of my constituents regularly catch the train from Bangor, whether for work or leisure. A great number in fact commute to Chester and farther afield to work.”

“Why should those who get on at Bangor have to sit on a train for over two hours just to reach Crewe, a distance of 84 miles, whilst those travelling from London to Crewe complete the journey in under two hours, despite travelling twice the distance.”

“Welsh commuters deserve parity of service with those in England. With a sound case for the electrification of the north Wales line, people in Arfon want to know why it’s not happening now and why priority is being given to HS2, a white elephant of a project which will take years to complete.”

“The Government should concentrate its efforts on upgrading the north Wales line and press ahead with the electrification so that my constituents and those across north Wales benefit from a faster, more reliable cross-border connection, giving north Wales parity with the rest of the UK.”
Professor John G. Hughes said,
“The existing services and infrastructure are poor and in need of urgent attention. There is no doubt that the economy of North West Wales needs speedier access to and from cities such as London, Manchester, Liverpool and Birmingham.”
“In 2015, around a million passenger journeys started or terminated at Bangor and Holyhead, and this would increase dramatically if services improve.”
“Not only will the local economy benefit from rail improvements as we see more people visiting the region, but businesses and the University itself would see enormous benefits as travelling times are reduced and journeys are made much easier.”