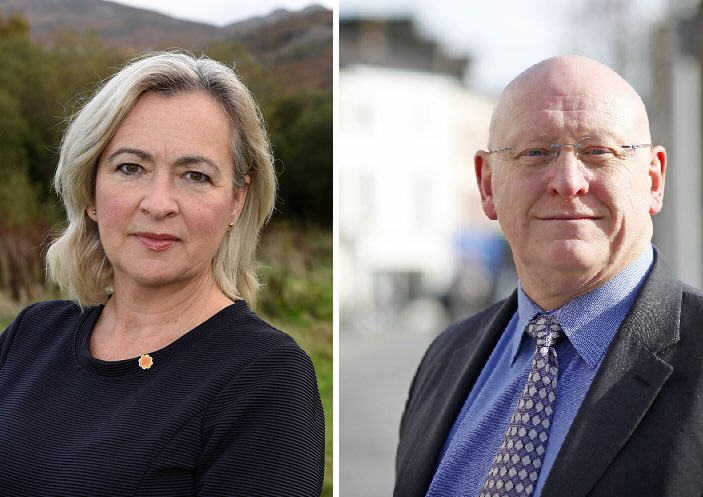 A petition calling on the UK government to postpone the roll-out of Universal Credit in Gwynedd has been launched by Plaid Cymru Members of Parliament for Arfon and Dwyfor Meirionnydd.

Plaid Cymru Work and Pensions Spokesperson Hywel Williams and Westminster leader Liz Saville Roberts have urged the UK government to scrap the implementation of the new benefit in Gwynedd until ‘serious flaws’ in the system have been redressed.

Hywel Williams and Liz Saville Roberts are calling on constituents to back their petition, urging the government to face-up to the hardship that awaits benefit claimants if current flaws aren’t properly fixed. Both Members of Parliament plan to present their petitions to the House of Commons.

‘The rollout of Universal Credit in selected pilot areas has been a disaster, both for the government and those unfortunate enough to be in receipt of the new benefit payment.’

‘We have no confidence that things will be any different for those who will be transferred onto the new benefit payment here in Gwynedd, unless the UK government take immediate steps to fix fundamental flaws in the system.’

‘Although the six-week delay in receiving the first payment has been shortened to three, appalling damage has already been caused – we have little confidence that this concession will lead to real relief of hardship.’

‘Families are falling behind with rent payments and becoming increasingly reliant on emergency support and foodbanks.’

‘There are several issues of contention which we fear, if left unaddressed, will prove to be a chokehold for claimants here in Gwynedd and Universal Credit has not yet been rolled out in the most intensely Welsh-speaking areas, such as our own.’

‘If truth be told, the Universal Credit system just cannot cope with treating our two languages equally. This typifies the failings of the DWP. Welsh speakers will be unable to claim their benefit online and will have to put-up with a largely untested helpline.’

‘According to Community Housing Cymru, tenants on the new system now owe more than £2 million in unpaid rents, even though a quarter of those now in arrears were managing to keep up with their rents before they were transferred to Universal Credit.’

‘Around 400,000 households can claim Universal Credit in Wales. But the benefit is only partly in force here, at 11% of potential claimants. We fear we are yet to see the full extent of the punitive effects of Universal Credit in its current form unless the Govt changes course.’

‘Plaid Cymru will continue to lobby the UK government to stop ignoring the overwhelming evidence that Universal Credit is causing unnecessary hardship to thousands of families across the country.’

‘They must heed growing concerns and stop the roll-out of Universal Credit in Gwynedd until sufficient progress has been made to redress current flaws in the system.’