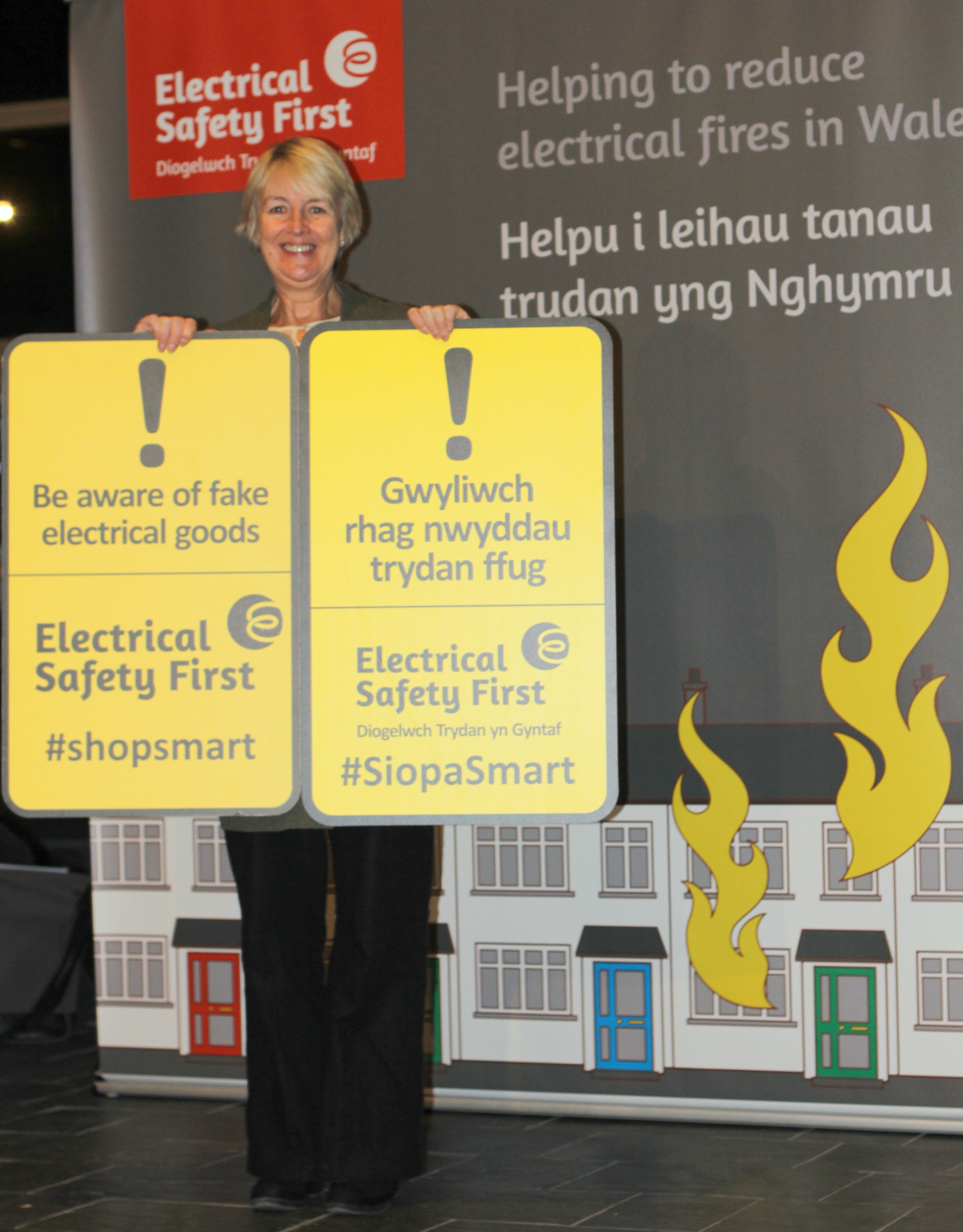 Now Siân Gwenllian, Arfon’s Assembly Member is helping the Charity raise awareness of the dangers of counterfeits in the run up to the Christmas shopping period, when high street and digital retailers offer a range of special offers and discounts.

“Christmas is always expensive and we are all keen to get a bargain but Electrical Safety First’s research makes it clear that shoppers must beware of fakes – particularly via the web”, explains Siân Gwenllian AM.

A new investigation carried out by the Charity reveals that an estimated 298,000 consumers in Wales (almost equivalent to the population of Cardiff,[ii]) have seen fake electrical products for sale near them or online. And 95,000 have knowingly, or by accident, bought a fake electrical item in the last 12 months.
Electrical Safety First also found that it’s not always easy for people to spot a counterfeit product. Three quarters of UK consumers were unable to identify genuine GHD hair straighteners and 3 in 5 could not spot a fake Apple charger[iii] - and with the rise of online shopping, it can be even more difficult. One in 5 online shoppers[iv] admitted they didn’t consider the authenticity of the product, with over half simply presuming that the electrical items for sale online were genuine.

And, of course, some people are deliberately buying fake products. One in 6 of those surveyed[v] said they would consider buying a product, even if they suspected it was fake, if it was cheaper than the original.
Robert Jervis-Gibbons, Public Affairs Manager at Electrical Safety First, said:
“We’re reminding Welsh consumers that among the genuine electrical items on special offer, there are dangerous fake electrical products to look out for. Our research shows that many of us could be more likely to buy a fake if we’re under pressure to buy by a certain date or in a race to get the cheapest deal.
In that rush, it’s easy to mistake a fake for a real product. With 95,000 people in Wales buying a counterfeit electrical product last year, this is a growing problem.
Fake items are usually poorly made, often missing key components or containing faulty parts – which impacts on functionality and safety - that can lead to fire or electric shock”.
Siân Gwenllian added “To make sure you buy ‘the genuine article’, Electrical Safety First has developed advice to help people spot a fake electrical product. Visit: www.electricalsafetyfirst.org.uk/guides-and-advice/electrical-items/safe-shopping/ to find out more. I’m urging all my constituents to check this before they do their Christmas shopping.”