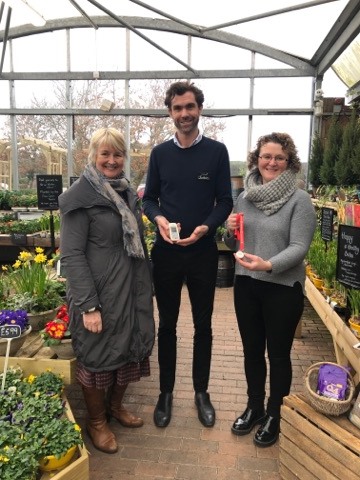 Plaid Cymru Assembly Member for Arfon Siân Gwenllian has welcomed a new tech-based initiative being trialled at Fron Goch Garden Centre which promotes independent living amongst people suffering from memory loss or who rely on carers.

The Wandersafe technology is being trialled at Fron Goch Garden Centre, Caernarfon as part of an initiative by Arloesi Gwynedd Wledig. The project has received funding through the Welsh Government Rural Communities - Rural Development Programme 2014-2020, which is funded by the European Agricultural Fund for Rural Development and the Welsh Government. It’s also part funded by the Nuclear Decommissioning Authority (NDA) and Gwynedd Council.

The system allows people living with dementia or who have a learning disability, to walk around the garden centre on their own, whilst providing their carer(s) with peace of mind that they are safe at all times.

Arfon AM Siân Gwenllian was given a demonstration of how the system works during a visit to Fron Goch Garden Centre this week.

‘I was pleased to see first-hand how this new and innovative system works, providing dementia patients and their carers with the freedom that is so-often lost as a result of the illness.’

‘That sense of losing one’s independence and having to rely on others is often cited as one of the most debilitating aspects of the illness. That is why embracing new tech-based systems like this will help sufferers and their carers regain day to day confidence.’

‘I would like to thank Arloesi Gwynedd Wledig for their work on this project and to Fron Goch Garden Centre and their staff for agreeing to be part of the trial. Both deserve praise for making this innovative concept a reality.’

‘If the trial proves successful, I hope this system will be rolled-out across Arfon, enabling people living with dementia and their carers to go about their daily lives with that extra bit of reassurance.’