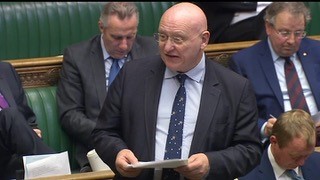 Writing in the Welsh edition of the Sunday Times, Mr Williams says that despite the campaign being a “disaster” for the west, there has been little reflection on the decision to go to war in the first place. Only 17 MP voted against military intervention in 2001, including the Plaid Cymru group. Hywel Williams is among only four of those 17 MPs who remain in Parliament today.

Plaid Cymru was the only major party to oppose the war in Afghanistan from the very start, questioning the military objectives of the campaign and the tactics used. Mr Williams says that the party warned at the time that a “lack of a clearly defined purpose for the campaign and hazy overarching aims, without an exit as well as an entry strategy, would lead to long term entanglement.”

The failure in Afghanistan, Mr Williams argues, should force the UK Government to “rethink” its foreign policy and to “retire the toxic pretentions of a ‘Global Britain’ ruling far off waves, skies, and lands.”

“It seems a pathetic understatement to say that this is a defeat and indeed a disaster for the west. Its tenets, its strategy and tactics for imposing its policies and have been proved to be a failure. Furthermore, supposedly overwhelming military might, and roughly transplanted forms of democracy have proved to be insufficient.

“This debacle is as significant for the West as the Suez crisis was for the UK, only on a much larger scale. Suez marked the end of one middling country’s imperial delusions and the beginning of less overt, though no less toxic, forms of colonialism. But the Afghan defeat has stopped the leading superpower in its tracks. Its up-and-coming rivals will not be slow in filling the vacuum.”

“In 2001, I was one of only 17 MPs who voted against the military intervention. When Plaid Cymru announced our decision to oppose the war on humanitarian grounds, we were described as appeasers. We were told that military action was essential to defeat the terrorist threat, despite a lack of clear war aims or any explanation of how carpet bombing, drone attacks, special forces actions and eventual invasion would lead to peace.

“Plaid Cymru’s Parliamentary leader in 2001, Elfyn Llwyd, questioned both the military objectives of the campaign and the tactics used. We said from the outset that the lack of a clearly defined purpose for the campaign and hazy overarching aims, without an exit as well as an entry strategy, would lead to long term entanglement.

“And so it proved to be. Adam Price, now leader of Plaid Cymru said in 2007 that, ‘because of our involvement in the invasion of 2001, we are part of the problem, not the solution’. We called for an exit strategy that comprised of withdrawing British and American troops, replacing them with an international force made up of troops from countries not compromised by involvement in the invasion. He warned that continued military action by Britain and America gave the Taliban a propaganda platform that could never lead to a peaceful conclusion.”

“Joe Biden does now say that the era of ‘major military operations to remake other countries’ is over. Those many countries who host American and other allied forces might well be sceptical.

“For the UK, it is high time to rethink its foreign policy, how it uses its military might and how it secures domestic democratic political consent for action. Suez was 65 years ago. It is time to retire the toxic pretentions of a ‘Global Britain’ ruling far off waves, skies, and lands.”