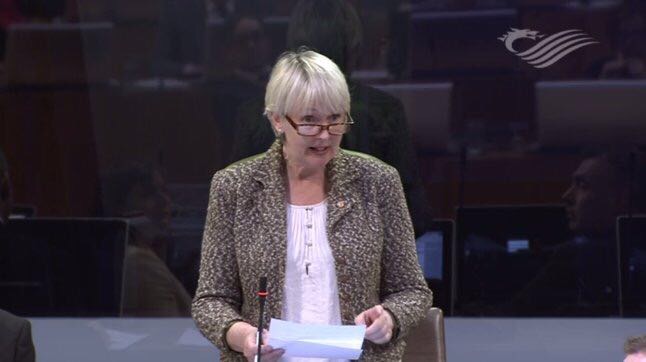 The Welsh Government’s language strategy is an attempt to conceal a period of lack of progress, according to Plaid Cymru’s shadow Cabinet Secretary for the Welsh Language, Siân Gwenllian. Siân Gwenllian stated that the government’s new strategy waters down existing targets. She also said that the new targets are insufficiently ambitious, and lack short-term milestones if the government genuinely wishes to reach its aim of a million Welsh speakers by 2050.

Siân Gwenllian referred to some of the government’s weak targets, including the target of establishing 40 new nursery groups by 2021, while the Mudiad Meithrin says that it is possible to open 120 new groups in that time. She also referred to the target of increasing the number of primary school children receiving Welsh-medium education to 30% by 2031, stating that this waters down the former One Wales government target of achieving the aim by 2020.

“Research by Cymdeithas yr Iaith has estimated that the targets in education will create only 110,000 new Welsh speakers by 2050, compared with the 400,000 needed. The government alleges that education will be a central element of the strategy, so one must ask – where will the other 400,000 come from?

“People working in this field tell us that it is wholly possible for us to be more ambitious than this. The Mudiad Meithrin has said it is possible to open three times as many nurseries compared with the government’s aim – why limit it to this?

“I hope we will be pleased when the Minister publishes his white paper next week. Attaining the aim of a million Welsh speakers by 2050 is wholly possible, if the government is willing to display the necessary political will and leadership to realise this.

“Plaid Cymru has already outlined our strategy to attain the target of a million Welsh speakers, which includes positive steps which must be taken immediately to make visible progress, as well as the long-term changes which will lay firm foundations for the future.”