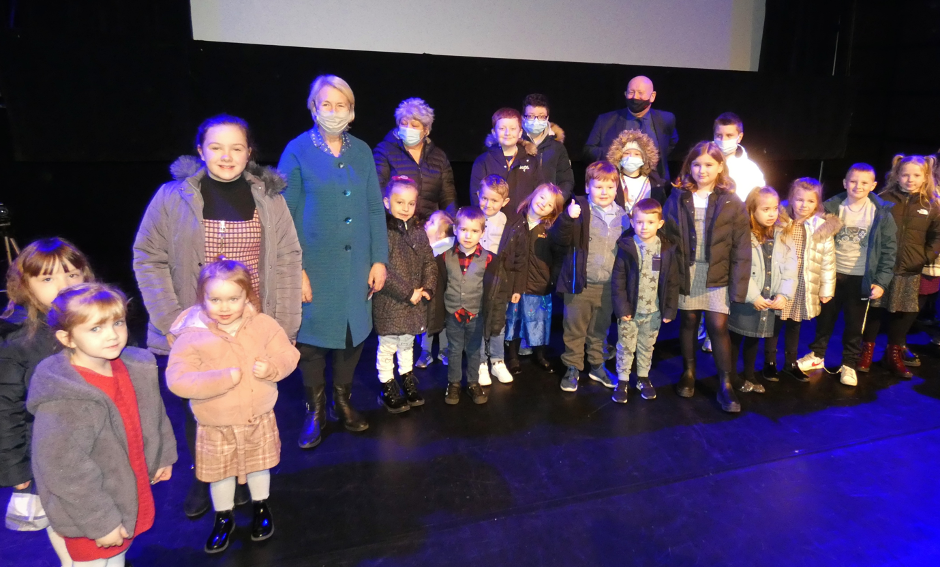 Pupils of Ysgol Rhosgadfan in Gwynedd have premiered a short film of their making that was shown at the COP26 Climate Change Summit in Glasgow.

The film, Blot-deuwedd, reimagines one of the most well-known Mabinogion, a collection of Welsh tales based on old Celtic legends and mythology.

Blodeuwedd, literally meaning "Flower-Faced" was the wife of Lleu Llaw Gyffes, a woman made from the flowers of broom, meadowsweet and oak by the magicians Math and Gwydion.

But Ysgol Rhosgadfan pupils have reimagined the story in the modern context of climate change as part of the Ynys Blastig (Plastic Island) project, a creative project commissioned by Gwynedd Council reacting to the climate crisis.

The ‘blot’ in ‘Blot-deuwedd’ represents man kind’s destructive mark on the world.

The short film showcases the acting talents of the main character, six-year-old Hana Hughes, fellow pupils at Ysgol Rhosgadfan, and renowned Welsh actress Ceri Lloyd. It was shown in 2021’s COP26 Climate Change Summit by the Future Generations Commissioner for Wales and was praised as an example of culture’s role in tackling climate change.

In an exclusive local premier of the short film at Galeri Caernarfon, Headteacher Judith Ann Owen talked of her pride in seeing Ysgol Rhosgadfan pupils star on the art centre’s big screen. Iola Ynyr of the Ynys Blastic project spoke of the “need to escape with our imaginations” whilst asking important questions about the future.

Parents, politicians and local government officials were invited to the public viewing on 21 January, and as well as seeing the short film premiered on the big screen, they were gifted with seeds to plant in their gardens.

Hywel Williams MP, who represents the area in Westminster has talked about the pupils’ “spectacular achievement.”

“As with all of the Mabinogi, in Blodeuwedd we can find a frightening relevance.

“In the legend we have the timeless message of man-made turmoil, pertinent to the age of the climate crisis.

“That’s a particularly loaded message to convey in a short film, but the children at Ysgol Rhosgadfan managed it spectacularly.

“Watching the short film prepared by the pupils, I was reminded of influential Welsh landscape painter Richard Wilson’s portrait of yr Wyddfa from Llyn Nantlle, which hangs in London.

“That portrait reminds us of Wales’ place in the world. We might be a small country, but we have an immense responsibility when it comes to the climate crisis.

“As I told the pupils in last week’s premier, ‘think globally, and act locally.’”

Siân Gwenllian represents the area in the Senedd. She said:

“I went to Rhosgadfan to meet with pupils before Christmas, and I was delighted to be invited back to the premier in Galeri Caernarfon.

“On my visit I received Christmas gifts that reminded us of the individual’s responsibility when it comes to the climate crisis. 12 Christmas crackers, representing the 12 days of Christmas, included suggestions of day-to-day things we can do to reduce our carbon footprint.

“Arfon is a corner of Wales that is bustling with creative, artistic energy. Offering children an outlet to that artistic energy and combining it with such a predominant issue as climate change is vital.”