Hirael exhibition “an evocative record of a unique area” 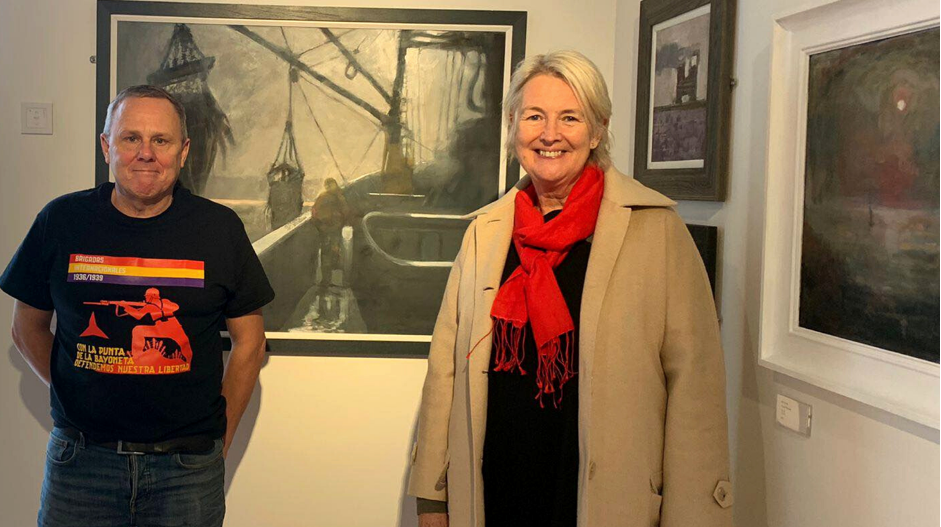 The Member of the Senedd for Arfon was recently joined by local artist Pete Jones in his exhibition at Storiel Bangor.

The artist Pete Jones was born in the Hirael area of Bangor. The artist has suggested there are autobiographical elements to his latest exhibition “The Bay”, an exhibition he describes as being “an exploration of the area in which I grew up.”

The Hirael area of Bangor is unique and stands apart from the rest of Bangor as an area, in Pete’s words, that was “shaped by the sea and slate.” It used to be a small cluster of dwellings, until the slate ships began using the port, and the local shipbuilding industry boomed in the 19th century. 12 streets of affordable housing for the soaring workforce were soon built around Ambrose Street.

Hirael was described as “self-contained”, with its own shops, pubs, shoemakers, tailors, and a baker, all serving the workers and families of workers employed at three shipbuilding yards established along the shore.

Hirael’s influence on local artist Pete Jones is strong, expressed in his latest exhibition The Bay. He says:

“The smell of the sea (and mud during hot summers) was strong and a reminder of our proximity to the deep.

“At high tide, large parts of Hirael are below sea level and under threat of flooding. A range of emotional and cultural reference points have guided the work. Recollections of looking out to sea and the horizon feature prominently in this body of work. I have attempted to create atmospheres which reflect my feelings for what was and is now gone.”

In a recent interview with Aled Hughes on BBC Radio Cymru, Pete described the works as “memories in paintings” of “a place that has changed a lot over the years.”

The exhibition was recently visited by Siân Gwenllian, who represents the area in the Senedd;

“The Hirael area, despite having changed over the years, continues to be of great historical significance. It was once a hive of maritime industry and was important in the local slate industry.

“It is the stories of places such as Hirael that need to be remembered as the area is designated an UNESCO world heritage site.

“From sailmakers, chandlers, foundry and blockmakers, to their families, it was the characters that shaped Hirael, and that’s clear in Pete’s evocative work.

“As a piece in the Liverpool Daily Post said, ‘Who would help but answer the call of the sea from Hirael, with its feet in the Menai Straits and the breath of the Irish Sea, blowing through its narrow streets?’

“It is clear that Pete is part a long lineage of Hirael people who have answered that call.”

Pete Jones was born and bought up in Bangor, Wales. After studying at Chester School of Art he completed a degree in Fine Art at Loughborough College of Art & Design. He became a Learning Disability Nurse for 30 years before returning to full time painting in 2016.

The Y Bae / The Bay exhibition of Pete Jones’ paintings will be hosted at Storiel in Bangor from 9 October to 31 December.