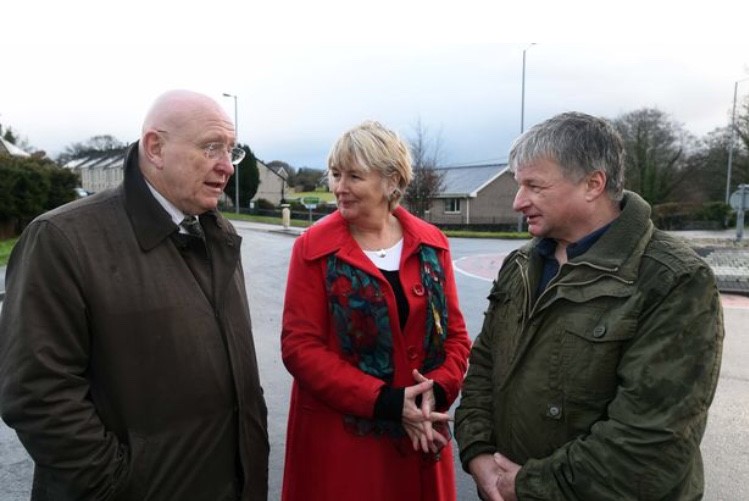 Plaid Cymru Member of Parliament for Arfon Hywel Williams and Assembly Member Siân Gwenllian have urged the Welsh Labour Government to urgently press ahead and confirm a start date for work on the Bontnewydd/ Caernarfon bypass early in the new year or risk further unacceptable delays.

In a recent reply to a question from Arfon AM Siân Gwenllian, Cabinet Secretary for the Economy Ken Skates indicated a decision would be taken ‘in the winter’ prompting calls from the local politicians for a start date to be announced in early January so that work could begin as soon as possible.

Hywel Williams MP and Sian Gwenllian AM met local Councillor Peter Garlick in Bontnewydd and local residents who are also pushing for a start date for the work.

‘We feel it is absolutely crucial that a date be announced as early as possible in the New Year so that the necessary preparations can be made for work to begin on the bypass in July 2018. Any further delay would be wholly unacceptable.’

‘There is significant frustration locally regarding recurring delays to the project, which was initially expected to begin in 2016 and completed by 2018. Congestion in the area remains a big problem for local people.’

‘A recruitment drive to hire sixty apprentices is waiting for the go ahead once a start date has been announced, which will greatly help fill the gap in the building industry across north Wales which is expected to worsen over the next few years.’

‘Any further delay to the Bontnewydd/ Caernarfon bypass scheme will also likely have repercussions on the timetable to train new apprentices, furthering pressure on the industry.’

‘The Caernarfon bypass is an important project for the area. In the long term it will ease the scourge of traffic congestion in the historic town centre, encouraging business growth and prosperity. In the short term it will provide hundreds of jobs.’

‘We therefore urge the Welsh Government to commit as a New Year resolution to publish a firm date for work to begin on this much-anticipated and long-overdue scheme. It’s vital this economically important local project can begin as soon as possible.’