CABLE ACROSS THE MENAI STRAITS

FIGHT AGAINST PYLONS GOES ON 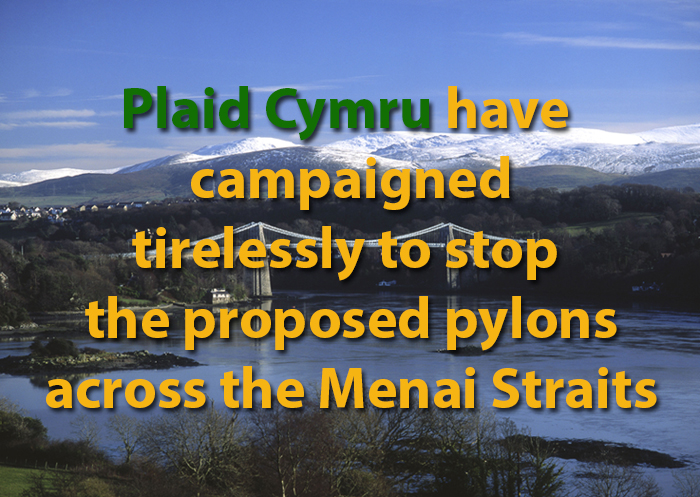 Plaid Cymru MP for Arfon Hywel Williams has hailed the National Grid’s decision not to erect pylons over the Menai Straits as a ‘telling first victory’ for the No Pylons campaign, but warns the fight against any pylons up to Pentir continues.

The National Grid announced last week they now favour carrying electricity under, rather than over the Menai Straits, yielding on their initial proposal to erect yet another row of pylons over the iconic landscape.

Despite this, Hywel Williams MP has urged caution, saying clarity was needed as to where exactly the crossing points will be.

“This is a telling first victory for the No Pylons campaign.

The National Grid’s announcement that they now favour carrying electricity under, rather than over the Menai Straits, is welcome news. They have yielded on their initial proposal, which was to put up yet another row of pylons.

There has been huge local opposition to the Grid’s proposals. The No Pylons Campaign, which I chair, has worked hard holding public meetings, explaining the problems that will be caused, researching and raising parliamentary questions and meeting Grid representatives.We firmly believe that electricity should be carried from Anglesey by an undersea cable. But this decision concedes the principle that pylons should not always be the first choice.”

“Despite this partial climb down by the Grid, I’m still concerned there may be problems. The Grid are not clear where the crossing points will be. Will there will be pylons on both sides of the Menai and up to Pentir?

If the Grid do force through the Orange Route, at the very least we will not see pylons disfiguring the Menai Straits, hitting our tourism industry and slashing property values.”

Plaid Cymru will continue to ensure that the National Grid stand by their promise and carry the electricity lines UNDER rather than over the Meani Straits.

There is no question or dispute we need a way to carry a huge amount of electricity from Wales to the market.

* The questions for us are How?
* How much should we spend, and who decides? 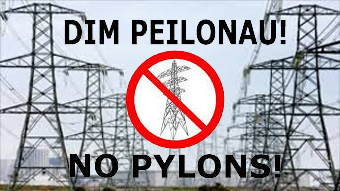 The National Grid has put forward a number of choices, all involving pylons crossing Anglesey, crossing the Menai Straits and on to Pentir. Pylons all the way.

Our standpoint is that the Grid should consider an undersea link from the north of Ynys Môn to Deeside and/or to Pembrokeshire. At present the Grid has not even put this forward as a possibility. They say an undersea link would be costly.

As Chairman of the No Pylons campaign, I am pressing hard for an undersea link. The people of North West Wales will get no benefit from the pylons, but will bear the cost in the effects on tourism and the outdoor activities industries as well as the visual intrusion.

Keep an eye out for our next No Pylons campaign group meeting.

Petition - you can sign the petition by clicking here 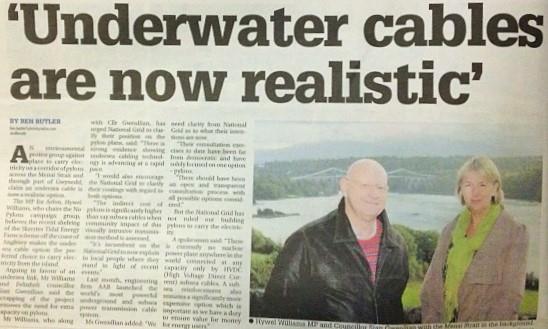 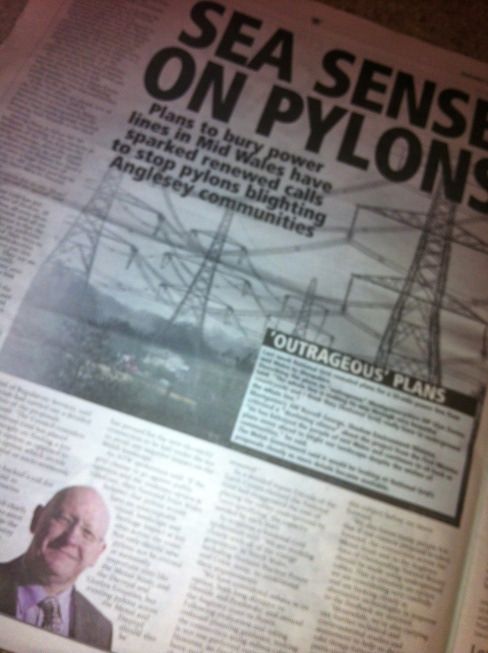 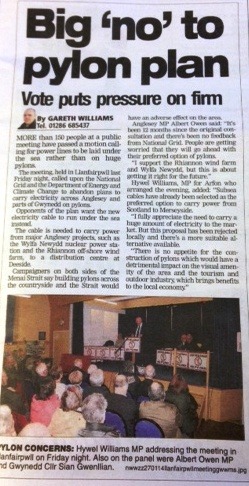