COLLECTIVE CALLS TO RETAIN CAERNARFON AIRPORT AS BASE FOR WALES AIR AMBULANCE. 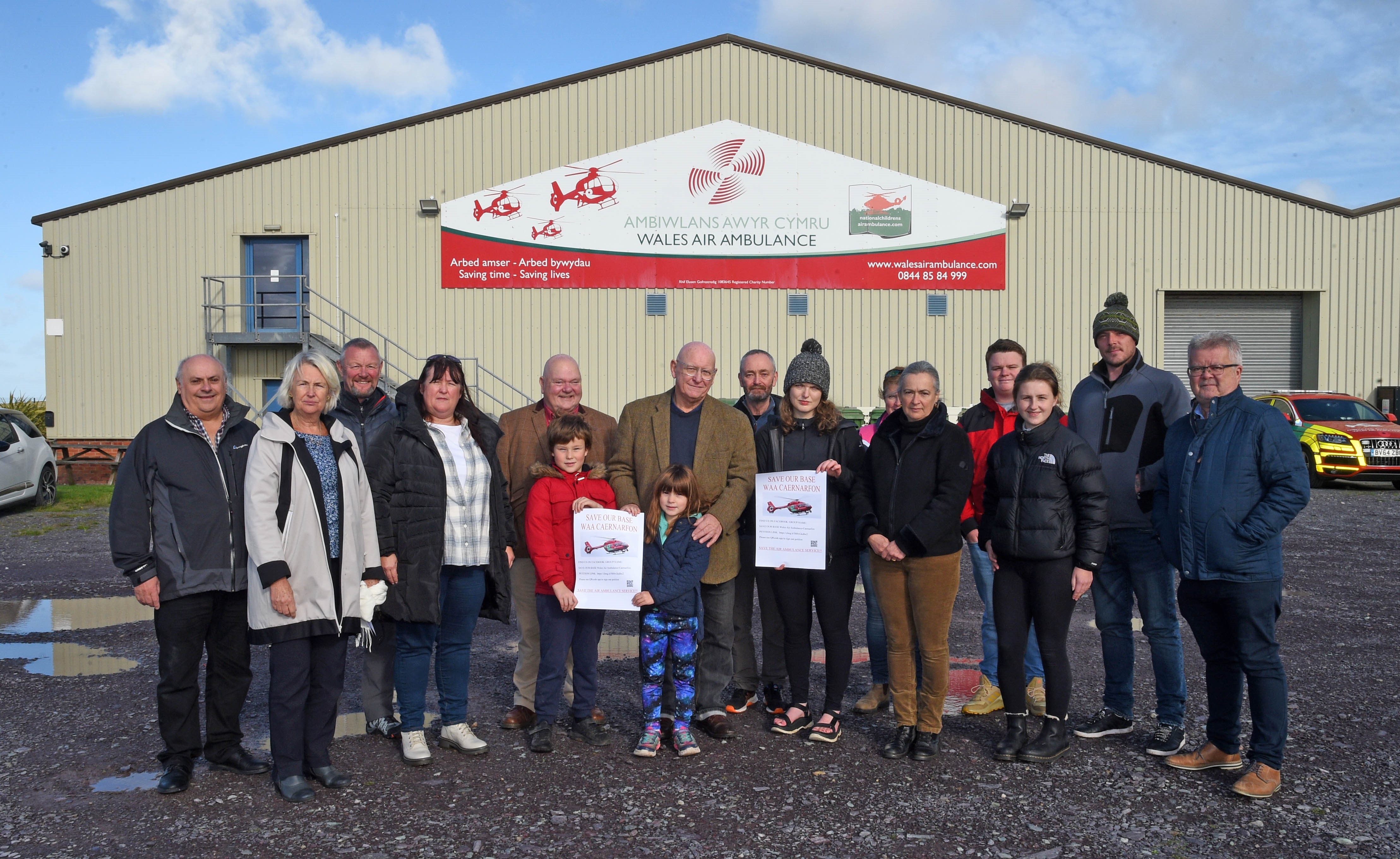 Plaid Cymru Members of Parliament Hywel Williams (Arfon) and Liz Saville Roberts (Dwyfor Meirionnydd) and Members of the Senedd Siân Gwenllian (Arfon) and Mabon ap Gwynfor (Dwyfor Meirionnydd) have written to the Chief Executive of the Wales Air Ambulance (WAA) voicing concerns at proposals to close their base at Caernarfon Airport, amidst plans to centralise operations in northeast Wales.

The Wales Air Ambulance Charity, which operates in partnership with Welsh Government and EMRTS, recently unveiled a shake-up of its national operations which could see the closure of both the Caernarfon and Welshpool sites in favour of one, centralised location in the northwest.

They question how the proposed new arrangement will strengthen safe emergency medical cover in Gwynedd’s rural areas where people live at great distances from Ysbyty Gwynedd’s Accident and Emergency department.

The Plaid Cymru politicians joined campaigners at Caernarfon Airport, Dinas Dinlle on Saturday in a show of solidarity with those calling for the service to remain in Caernarfon.

The politicians were joined by campaigners including Cian Wyn Williams of Porthmadog, who was saved by the Air Ambulance after an accident in Porthmadog ten years ago.

'A number of our Arfon constituents have contacted us, including some who are directly involved in fundraising activities supporting the work of the Air Ambulance locally, concerned about the proposed reorganisation of the service.'

'It is our understanding that the proposal is to close the Caernarfon and Welshpool Air Ambulance bases and establish a single, new base in the northeast of the country, whilst maintaining the current bases in south Wales as they are.'

'This proposal has caused significant upset in the Arfon area, with suggestions that the plans are predominantly a cost-cutting exercise that will result in yet another service moving eastwards, to the detriment of rural communities in Gwynedd and Ynys Môn.'

'There are concerns that closing the base at Caernarfon would lead to delays in response times as the helicopter would need to travel from further afield, and whether longer flight times would increase the number of fuelling stops required - putting helicopters out of action for longer periods.'

'There are already longstanding concerns about Welsh Ambulance response times. Closing the Caernarfon base would only add to concerns about gaps in service provision for northwest Wales.'

'It seems reasonable to surmise that if the Air Ambulance is based in an area with higher population, and with the busy A55 on the doorstep, it will be drawn to attending incidents that were previously covered by the Welsh Ambulance Service and thus will attend more incidents per annum.'

'It would also be useful to know whether any consideration has been given to the potential impact of these proposals on local fundraising and community involvement. The Air Ambulance has become an integral part of life in Arfon. Closing the base risks undermining this goodwill.'

'There are obvious concerns about the future of both civilian and medical staff employed at the Caernarfon base, many of whom drawn to the area because of the opportunity to work in the Air Ambulance Service.'

'If the Caernarfon bases closes, these highly trained and experienced people may seek to move elsewhere, inflicting a great loss on the NHS locally.'