One of the main communications centres in the north of Wales for more than 60 years has been given a revamp to make it fit for the future. 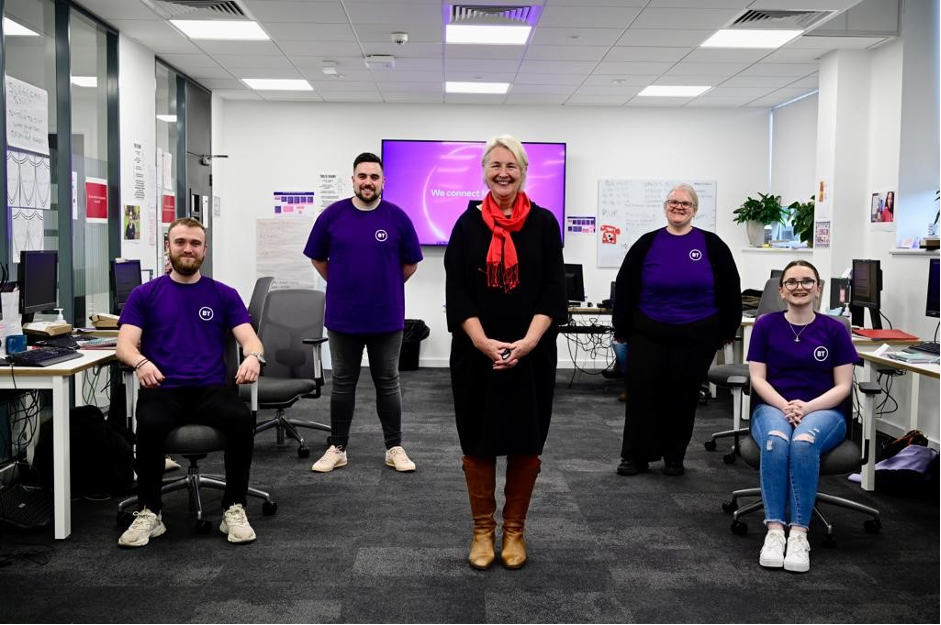 The recently completed redevelopment of BT’s Bangor building has been praised by the local MS on a recent visit.

The facilities on Garth Road were first opened in 1957 and has been providing a variety of services on behalf of BT since, including customer service and directory enquiries, payphone customer services and handling BTGroup head office switchboard.

BT has referred to its Bangor location as “one of its key locations in Wales”, and a substantial investment in the branch was recently announced as part of the company’s ‘Better Workplace Programme.’ The refurbishment was completed earlier in 2021, and the local MS has recently visited the site, as external visitors weren’t able to attend the first celebration event to mark the completion of the refurbishment.

Siân Gwenllian MS, Arfon’s representative in the Welsh Parliament, was recently invited for a tour of the new facilites. She said;

“It was great to witness the benefits of a company such as BT investing in Bangor’s city centre, with roughly 150 staff members in skilled jobs based at the location.

“As Plaid Cymru’s spokesperson for the Welsh language, I must give special mention to BT’s long-running and reliable bilingual service, that is based in Bangor. It is encouraging to see our national language having a direct impact on the local economy, bringing jobs to Bangor.

“High quality employment in our local communities is an integral part of Plaid Cymru's Arfor vision of strengthening Welsh-speaking communities, and seeing the continuation of BT's early commitment to the language 27 years ago is promising.”

In 2019 BT celebrated 25 years since they established its Welsh language policy, of which the Bangor branch is central to. In 1994, BTbecame one of the first large private companies in the UK to adopt a voluntary bilingual policy in relation to the Welsh language

“I’d like to thank BT staff for an invite to tour the bulding.”

Nick Speed, BT Group’s Director in Wales, said: “We were really pleased to welcome Sian Gwenllian to the centre, following its recent refurbishment.

“Bangor is an important site for BT, with teams here providing a range of specialist services. These are skilled roles that attract people from Bangor, Ynys Môn and across the north of Wales. The refurbishment has resulted in a more modern and flexible workplace, fit for the 21st century, that we hope will inspire colleagues and give them the tools and environment to be able to succeed.”

To mark the completion of the centre's redevelopment, BT partnered with the National Poet of Wales Ifor ap Glyn to create 'Sgyrsiau', a poem to celebrate the importance of 'conversations' and keeping people connected.

The poem – and accompanying video – can be seen here