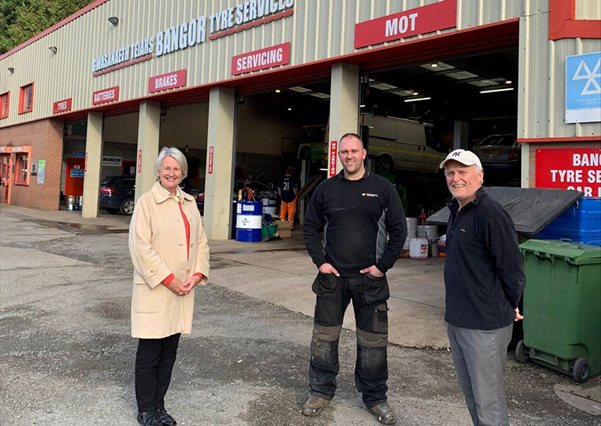 Bangor Tyre Service was established in 1987 by two local men, originally located behind the former Railway Hotel before moving in 1992 to its current location on Caernarfon Road.

Like many other businesses, Bangor Tyre Service inevitably suffered a lull, as people’s cars laid idle during the lockdowns. But they’ve come out the other end, and the company says local people continue to support the local business.

The business was recently visited by Siân Gwenllian MS and Gareth Roberts, the former Bangor ambulanceman that serves as a county councillor for the Dewi ward.

“I am so pleased to see a successful family business who have created good quality jobs for local people.

“It was also great to hear that they hope to expand the business in the coming years.”

Gareth A. Roberts was joined by Siân Gwenllian MS, who served as Gwynedd’s Small Business Champion during her time as a councillor;

“It’s a great time to remind people of the benefits of supporting local businesses such as this one.

“For every £1 spent in independent businesses, 63p stays in the local economy. Right here in Bangor.

“It’s great to hear that they’ve come out the other end of Covid, and that local people continue to support this local business.”