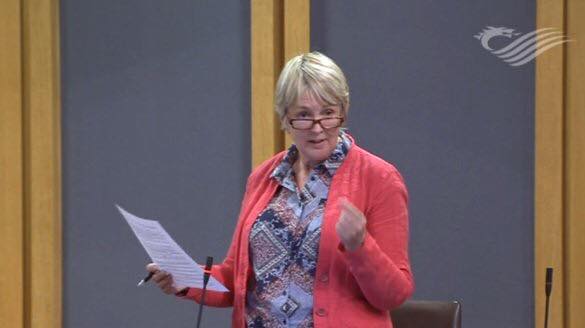 Sian Gwenllian stated that six years have gone by since the introduction of legislation on the Welsh language, but that to date, only a limited number of public bodies have implemented the standards. She said it was disgraceful that more progress had not been made, with some reports having laid on the minister’s desk for years.
She said that there were indications that the Government is about to publish standards in the area of health, but that the Government has still made no progress on housing associations nor on the publication of standards for the energy, water, telecommunications and transport sectors.
Sian Gwenllian also expressed her disappointment that GPs are not included in language rights for the health sector, and said that people should have the right to basic services in the Welsh language.
Plaid Cymru’s Shadow Cabinet Secretary for the Welsh Language, Sian Gwenllian, said:
“At last, there is a hope that regulations leading to reinforcing and safeguarding the rights of Welsh speakers in health are about to be published by the Welsh Government – almost two and a half years since the Welsh Language Commissioner submitted them to the Government and five years since the publication of the Welsh Government’s ‘Mwy Na Geiriau’ strategy aimed at strengthening Welsh language services in the field of health.
“This Government’s slowness in introducing standards for different bodies is disgraceful. Questions need to be asked why they are dragging their feet and whether the government is really willing to legislate in favour of the language despite the commitment to create a million Welsh speakers by 2050.
“We are still awaiting the publication of standards in the area of housing and in the energy, water, telecommunications and transport sectors. To date, 6 years after the legislation was passed, only a limited number of public bodies are operating the language standards.
“Although there are indications that the health standards are about to be introduced at last, following pressure from Plaid Cymru, it is disappointing that they shall not include GPs. People’s right to have the services of a general practitioner through the medium of Welsh is key, and the minister should reconsider this.”