ELECTRIFYING THE NORTH WALES LINE IS 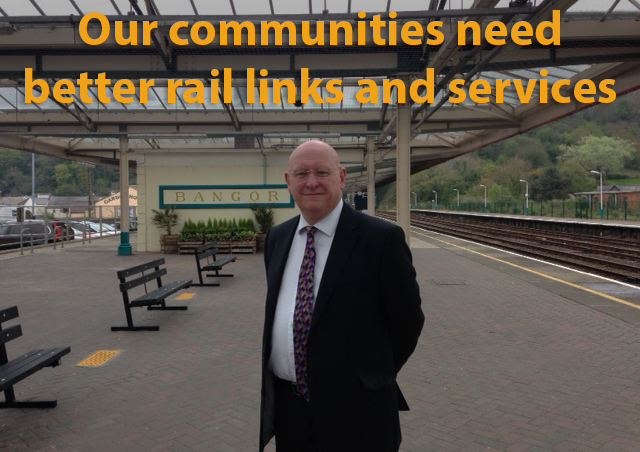 Arfon MP Hywel Williams has repeated his call for the Westminster Government and Labour Ministers in Cardiff to come to agreement over who should fund the electrification of the North Wales Main Line and instead, ‘get on with doing the job’.

Mr Williams, who has long campaigned for the electrification of the line between Holyhead and Crew, said that commuters in North Wales were bearing the brunt of indecision and dithering, condemning them to a third class rail service, whilst passengers across the border enjoyed the benefits of electrification.

“I have made the case for the earliest possible electrification of the North Wales line on several occasions, starting many years ago with a meeting with the Strategic Rail Authority. This should be on the Department for Transport’s list of top priorities. But whilst the Westminster Government is engrossed with HS2 and Labour in Cardiff is avoiding the issue, commuters in Arfon are bearing the brunt of indecision and political dither.

In practical terms, electrifying the line between Crewe and Holyhead makes perfect sense. At present, trains travelling between London and Crewe travel twice as fast as those between Crew and Holyhead. It’s not acceptable that once commuters cross the border into Wales they’re expected to make do with a significantly reduced service comparable to a third class rail experience.

Many of my constituents regularly catch the train from Bangor, whether for work or leisure. A great number in fact commute to Chester to work. Why should those who get on at Bangor have to sit on a train for over two hours just to reach Crewe, a distance of 84 miles, whilst those travelling from London  to Crewe complete the journey in under two hours, despite travelling twice the distance.

What my constituents want is a better service, better value for money and investment that will make a real difference to their commute. Welsh commuters deserve the same service as those in England. With a robust case for the electrification of the North Wales line, people in Arfon want to know why it’s not happening now and why priority is being given to HS2, a project which will take years to complete.”

The Government should concentrate its efforts on upgrading the North Wales line and press ahead with the electrification as soon as possible so that my constituents and those across North Wales benefit from a faster and more reliable cross-border connection, giving North Wales parity with the rest of the UK.

Recent questions regarding future plans for the existing service if HS2 becomes operational have given cause for concern. I’m concerned that the current main line will be used for local services in England. This could mean the only choice for long-distance commuters to North Wales would be a stopping service or an expensive ticket on HS2. The Government says it has no plans for this but this is an obvious danger.” 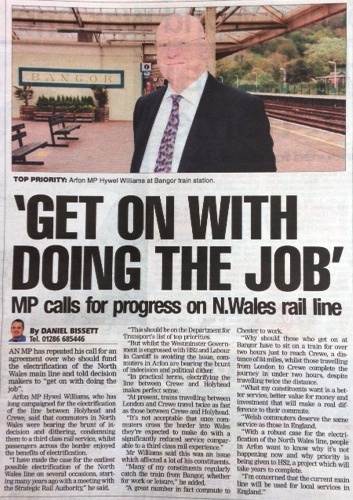